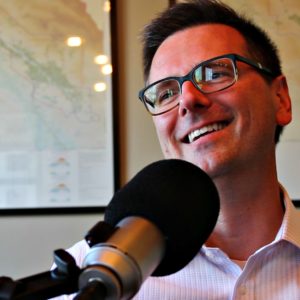 Something about Minnesota just tends to call people home.

Maybe it’s the fresh air, or the lakes, or the genuine “Minnesota Nice” attitude that just isn’t present across the globe. Maybe family and friends tug at our hearts a little more than we thought they would. But add in a successful, warm, homey family business, and staying away is nearly impossible.

Rick Anderson knows the homecoming story better than anyone. He’s a third-generation manager of France 44 Wine and Spirits, a 60-year-old family business. The Edina/Southwest Minneapolis institution started as a humble mom-and-pop liquor store in the 1950s when Anderson’s grandparents, Red (a fastpitch softball champ and local entrepreneur) and Harriet Anderson, opened its doors in downtown Minneapolis on Nicollet Avenue. Rick is part of the third generation of Andersons to own and operate France 44–the down-home shop where employees remember your name and your whole family is always welcome.

Red and Harriet’s little bottle shop did well on Nicollet, but when the giant Convention Center budged into downtown Minneapolis in the 1970s, they knew it was time to make a move. Their son (Rick’s dad) found an abandoned gas station on France Avenue and 44th Street that he swore up and down would just be perfect for their store. It took a little imagination. Well, a lot of imagination. Not only was the storefront itself nowhere near ready to become a charming community liquor store, but the area was not the fun, trendy area it is today. It was a sleepy neighborhood of modest middle-class homes, good for family living–but businesses weren’t exactly racing in to join the fun.

Like they always do, the Anderson clan persisted, running on a passion for creating a community store about more than cheap Budweiser, and the store grew and grew into what it is today. Now, they have a carefully curated selection of beer, wine, and booze–as well as a fully-stocked deli and cheese shop, charity causes they’re passionate about, and traditions and events for the whole town to enjoy.

Rick Anderson didn’t set out to be part of his family business. Sure, he spent his after-school hours and weekends at France 44, carefully sweeping and stocking and pricing items, but his career dreams grew bigger than Edina could hold. When he turned 18, he set out for college on the East Coast and picked up a high-powered, high-energy consulting job right out of school. He pushed and pushed, working long hours as hard as he could, but he felt like something was missing. That nagging feeling he wasn’t where he was supposed to be, making him homesick, would not go away. He knew, deep down, where he would feel right with the world again.

Rick didn’t shoot to the top of the France 44 ranks straight away. His dad, the owner and manager, wouldn’t hear of it. They had several loyal, smart, knowledgeable employees who had worked solely at France 44 for decades–some since its opening day. Someone who was literally grandfathered into the business would have to cut his chops at bottom levels first. Rick put his consulting skills to good use, learning everything he could about the shop and industry, all the while gaining trust from the staff and surrounding community. First project? Renovating and updating the old building.

“I learned in consulting that businesses that succeeded were the best practices,” Anderson said. “They always had an inspirational feel to them.”

He didn’t want his beloved France 44 to feel like a run-down, fluorescently-lit discount liquor stores. He knew there were already plenty of those, and they had their loyal patrons as well. What he wanted was to create a community space, somewhere a mom could bring her kid as she went shopping and not feel embarrassed or judged if she ran into another parent, or a teacher, or neighbor. He created a light, bright space with a different feel than any other liquor store. It’s high-class without being expensive and inaccessible. And everyone is always welcome.

Part of that is the fact France 44 offers much more than liquor. They have a little grocery store, a cheese shop, a deli–all with natural, locally-made or -harvested items. The meat all comes from free-range animals who lived and died humanely. The cheese is good and fresh, including some from one of the best cheese makers in the country (that’s Pleasant Ridge in Wisconsin, for you foodies–and the owner comes to France 44 twice a year to chat cheese and dole out samples). The staff knows: Cut-to-order cheese, as opposed to pre-cut, sliced, or, heaven forbid, shredded cheese most grocery stores offer, is always fresher and better tasting. They’re willing to bet you can tell the difference.


Forever Evolving, For the Good of the Community

With recent renovations, the deli at France 44 is bigger than ever. Like the rest of the store, the deli sandwiches are made from fresh, quality ingredients. They’re simple–there are hardly ever more than three or four ingredients–but they’re good.

“The idea is if you’re using high-quality ingredients, you don’t need all the razzmatazz,” Anderson said.

Free wine tasting nights every Friday and Saturday, though, really bring in the biggest crowds. You’ll see everyone, from families to dogs to twenty-somethings who just want to try new types of wine, and it really helps bring our community together. There are regular groups who come to see their friends–staff of France 44 included–and it’s hard not to walk out with something new and wonderful.

Anderson dedicates his life to creating a warm, welcoming space for the community that’s supported him his entire life. Part of that is trusting his customers–he knows you’ll shop around, but he knows the people who are truly his customers (i.e., people who care about a friendly small-business experience over the cheapest price and quickest option) will come back. As the old saying goes, if you love someone, set it free–if they truly loves you, they will come back.

And come back, they do. He listens to his customers, absorbs their constructive criticism, and always strives to give them something more–and better than they’d get anywhere else. He gives to local charities, he’ll remember your favorite wine and suggest some cheese to go with it, and he cares about you as a person. Try getting that at a warehouse discount store.