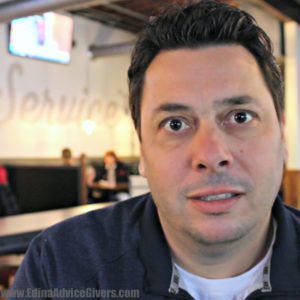 It was the good ol’ days in 1997 where Pete Rifakes would brew up his own lagers in his garage—Seattle is the best for homebrewing lagers, he insists, because of the constant cool temperatures. There were grad student parties, more frequent but of a different flavor than undergrad days, and Pearl Jam and Nirvana ran free over the trendy streets of a city that had already embraced the craft beer boom. On a regular basis, you could catch Rifakes walking into the old yellow brick building of Big Time Brewing Company, ordering a beer pint (probably a Scotch ale) and looking over the first of many, many undergraduate papers as a grad student TA in accounting. Eventually Rifakes paid his dues and got a corporate job at Northwest Airlines but found it was too corporate. The good ol’ days train seemed to stall out.

Really, though, it’s a good thing. That kink in the tracks got Rifakes going back to what he was meant to do: create Town Hall Brewery and its latest family member, Town Hall Station in Edina. “I knew I wanted to get into this endeavor mostly because there weren’t breweries and brew pubs in Minnesota. The craze came to Seattle 10 to 15 years before it came to Minneapolis,” Rifakes said. “I’m a finance guy, so it did start out, ‘Hey, what can make money?’ but once you get into it you look at lifestyle, what you want to do and what you want to set your mark at for the rest of your life.” 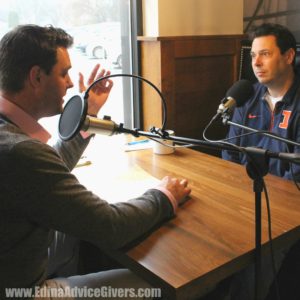 Rifakes’ legacy—so far—isn’t the 60 styles of beer he helps creates per year, nor is it the four unique Town Hall locations he’s created. It’s the feeling he gives to everyone who comes to visit. When you come into Town Hall Station, you’re not necessarily visiting the hippest, trendiest millennial district. You’re visiting a neighborhood. Once you walk in, slide into one of the black leather booths fashioned like an old motorcycle seat, and order one of the Station’s signature tacos. Whether you sit by the big garage doors of the former Wally’s Gas Station or head outside to the patio in warmer weather, whether you order a seasonal beer or one of their flagship brews, you’re going to feel at home. This isn’t a grab ‘n go place; this is a kick back and relax, talk until the food is long gone kind of place. This is where you come in and the staff all know your name, but you can’t tell if it’s because you can’t stay away or if they’re just that friendly. This is Rifakes’ vision, and it was born of the feeling of home and community he felt when he was growing up in West Middleton, Wisconsin.

Listen to the entire podcast!

GIVING BACK THE DREAM

When Rifakes initially opened his first restaurant, Town Hall Brewery, the good brews and the hospitality were there, but it took a few rough account balances and plenty of self-printed flyers to get the word out. But, through hard work and love, he created community at Town Hall Brewery. And then he grew his brand, adding Town Hall Tap and Town Hall Lanes. And now at Town Hall Station, it has grown even larger.

The people there love the welcoming atmosphere that is universal to all Town Halls, but Edina locals love the individual personality the Station has. They even talk to Rifakes about getting site-specific apparel for the Station.

“Our employees and regular customers became our family. … We were anti-chain. We were independent, and I tended to be there every day,” he says of the Town Hall empire’s start two decades ago. “We tended to have full time servers that were there every day that became a part of people’s lives, and we have great product.”

Rifakes is grateful for the community Town Hall has built, but he never forgets the organizations and people that helped show him what community meant in the first place. That’s why 50 cents of every West Bank pale ale is donated to a monthly cause. He wants that feeling of coming home, of hanging out with friends and family, of feeling valued and safe, to be something that everyone has. You know you can find it at Town Station, and with the support of the community, Rifakes is giving back to as many people as he can.