Family businesses often survive because passion is “in the blood.” Sons and daughters spend so much time steeped in the family venture that it becomes wound up in their DNA. In the restaurant industry where 365-days-a-year service is standard, this can reach another level. For “local kid” Michael Giacomini, working in the restaurant world seemed like an inevitable and natural fate… yet to Michael, it was an entirely thrilling and wildly new venture that he couldn’t wait to place his stake in.

Michael Giacomini grew up in St. Louis Park, and was steeped in the industry from an early age. His mother worked for a large local food supplier, while his dad was a successful restaurateur. Their differing roles allowed Michael to see food service in varying degrees, from the importance of marketing an establishment to budgeting for a constant flux of supplier invoices. By the age of sixteen, Michael was hosting at Twin Cities restaurants and taking on more formal roles within the businesses. At this time, Michael’s father was associated with the Blue Plate Restaurant Company – a popular local restaurant conglomeration. Michael was in college when his father decided to set off on his own, leaving a spot open at the helm for Michael to join once he was ready.

To build Red Cow from the ground up, Michael’s family dedicated themselves to thoughtful research and brainstorming. Landing on a strong name for the business was a bit of a ping-pong match itself. From observing trends on the West Coast, they felt strongly about a business surrounding “gourmet burgers.” What name would convey their concept? The whole family bounced around countless ideas in an attempt to find something that would stick. It took a walk around Lake Calhoun for his mom to finally solve their woes and think of the now ubiquitous “Red Cow.” The red reflected the family’s love of wine, along with red meat, while the cow more explicitly called out the restaurant’s central dish. It was slick, catchy, and “weird…but I like It.”

From there, Michael and his family continued to hone Red Cow to reflect excellent burgers, fine wine, craft beers, and “sophisticated 21st Century tavern” vibes. In February of 2013, they opened the doors of their first location on 50th and France.

Michael devoted himself to Red Cow’s success from day one. However, despite the family’s broad range of restaurant experience, there were kinks to be worked out in the business. Michael acknowledged that opening a restaurant is an emotionally and financially nerve-wracking experience. You find yourself thinking, “I hope people will come in the door.” For Michael and his family, the location made all the difference for their first restaurant. Many of the neighbors of the 50th and France Red Cow spot “don’t have time to make dinner.” Moreover, Michael could rely on the utterly candid feedback of the Edina residents.

Nevertheless, feedback takes time. Michael admits that Red Cow’s early days were a bit of a guessing game. They changed their menu at least ten times in the first month, and struggled with many “dead” days. Eventually, the guest responses came in, and most of them expressed the idea that Red Cow’s “food is great, but the service is just okay.” This was a crucial insight for Michael, and gave him an opportunity to truly sink his teeth into the family business.

With these new reviews, Red Cow swiftly upped its customer service game. Michael took it upon himself to curate happy “internal and external guests.” He learned that making the internal guests – or employees – happy led to much happier external guests. Red Cow sought to create a joyful experience from the inside out. 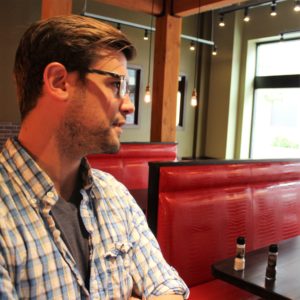 urant began to “touch tables.” This is a concept that involves Red Cow staff closely attending to each and every patron who crosses the threshold. Michael and his family believe in being seen; people want to know the staff genuinely cares, as well as feeling “that happy medium between [rushing] and hanging out…” Red Cow strives to be a seamless part of the community, with 80% of their guests coming from between one and five miles of the Location.

This notable shift allowed for Michael and family to open a second Red Cow location in St. Paul in 2014. Not only did a second location exponentially spread the Red Cow name, but it also allowed for Michael to grow in his role. During his collegiate hiatus to Colorado, Michael had found himself working on and for Red Cow in every spare moment and school break. With the christening of this new location, Michael happily returned home full-time to take over all of Red Cow’s back of house operations. The family has also since opened a North Loop location, as well

as Red Rabbit – an Italian influenced spin-off that focuses on pizza, pasta, and oysters.

Running a business can be a draining grind that far exceeds the typical 40-hour work week expectation. For Michael, it’s important to stay excited and passionate. He continually returns back to the idea of creating happy employees to do so. Red Cow has become a wonderfully busy establishment; it’s important to maintain a high morale amongst all 372 of its employees. Michael keeps them energized by asserting that “if [you’re] working, I’m working.” He leads by example, and Red Cow’s continued success is a testament to his dedication to this. He’s not afraid to jump in to bar-back, chatting up the neighborhood regulars and building relationships with everyone around him.

An important piece of staying encouraged also comes from looking forward. Red Cow will open an Uptown location before the end of this summer, and they strive to open another Red Cow every year for the foreseeable future. Their focus on internal development supports this massive goal; Michael refers to the family business as a “leadership development company that just happens to serve food.” This sort of people-focused mindset allows Red Cow to go anywhere the family dreams. Furthermore, Red Cow prioritizes giving back to the communities who have supported them. Michael and his father make sure both the budget and marketing plan reflect this each year, giving to numerous local charities as well as working in collaboration with area schools. Michael, his family, and the whole Red Cow crew realize you are nothing without the people and places who surround you.