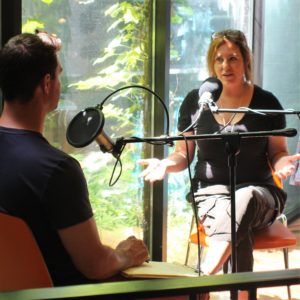 A woman + a pile of swimsuits + a fitting room = Tears.

Does that equation sound familiar? You are not alone. It is a scenario that’s neither rare nor is it new; women have always found swimsuit shopping one of the most distressing ordeals to endure.

Jennifer Cermak felt like that once. But no longer.

The owner of boutique swimwear store, Nani Nalu recalls shopping for her Costa Rican honeymoon 10 years ago, “I was already crying in the fitting room alone with a pile of massive swimsuits that were all just bad. And they made me feel bad.”

Having worked as a swim wear buyer for a large retail chain, Jennifer Cermak had assumed her understanding for the nuances of swim suit design would have made costume selection a breeze. In fact, this surfer chick had planned to purchase several pieces for the three weeks she would be spending in and by the water.

It was not to be

As she sat there in the Mall of America with the only combination that fit – a size 16 top and a size 2 bottom, both solid black and emblazoned with what she describes as ‘grandma flowers’, she realized, “I am much cuter than this!”

That experience of being made to feel like there was something wrong with her, her style, age and personality, planted a seed of change in her mind. It would blossom over the upcoming Costa Rican getaway.

It was her husband’s comment on how a fellow vacationer kept adjusting her costume that completed the circuit. Jennifer immediately remarked, the lady had intentionally chosen a larger size so it wouldn’t pinch. The light bulb lit – she was going to offer a swimsuit range unlike any other.

“We wear our swimsuits in public, half naked. I wanted to make that easier for people.” 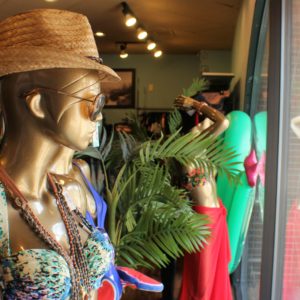 Jennifer’s husband asked her to prepare a business plan, and the resourceful young lady drafted a 65-page document using the internet as her only resource. While she had to improvise on her paperwork, Jennifer was already well-versed with the components of the perfect swimsuit.

“I was familiar with a lot of the technology because I had studied it for my job. Whether the material has curves or is cut straight, silicon grippers for the top to hold it in place when moving or handling kids, convertible straps because we are all built differently.”

When asked how she decided on the name ‘Nani Nalu’, Hawaiian for ‘Beautiful Wave’, Jennifer laughs – it came to her on a night out drinking. Her logic was that women and waves are both shaped by curves and share an inherent beauty. We think that rationale survives both the harsh light of day and sobriety. Soon after landing their name the couple made their leap of faith.

They found a small space in Ridgedale Mall on which they took a 1-year lease. The entire store interior had to be created from scratch and a shortage of cash meant they had to do it all themselves. Still, the idea was sound and their new adventure “broke even” in the first year.

It was no easy task, though. Creating a clothing brand without a marketing campaign and competing with established names was always going to be an uphill battle. Jennifer resorted to joining lines outside fitting rooms and stores to hand out business cards or even subtly name-drop to pique interest.

But all those hours, days, weeks and months and their initial successes were soon to be undone.

The Ridgedale Mall was earmarked for renovation, a move that would effectively halve their store space. The only choice was to relocate. The entire operation was uprooted from Ridgedale and Jennifer decided on Edina, South Minneapolis as its new location.

The upheaval caused by this move put the couple on the verge of bankruptcy. It came to a point where Jennifer told her husband to give her a final 6 months; if things did not change, the Beautiful Wave would be washed away.

Just then, one smart move turned everything around – Jennifer managed to get Nani Nalu featured in the local paper.

Overnight, the store was deluged with calls to the point their voicemail was full and the server hosting their website crashed from a major increased in traffic.

When asked what it was about the article that had such a powerful effect and mobilized so many women to seek them out, Jennifer says, “It was completely written from the honest perspective of a woman.”

“It spoke about how difficult and trying swimsuit shopping is for women and how Nali Nalu was changing that, and the real solutions to real problems we were presenting. That idea resonated with women.”

Jennifer’s approach to swimsuit shopping turns the traditional way women shop for swim accessories on its head. Most women first focus on colors and cuts they like, then try to find a costume style that fits best. At Nali Nalu, staff identify the style that fits each customer first, and only then do colors and designs enter the picture.

It is a concept that works remarkably well – Jennifer’s stores have a 92% loyalty rate, virtually unheard of in the industry. Close to 90% of new customers come to her on recommendation from their social circles.

Jennifer does not mind the high quality of her swim wear range means customers usually only need a new swim suit every three years or so. She knows her customers come to her at a time when they are vulnerable, considering how to best step out in public, half naked.

Her business philosophy recognizes in each woman the Jennifer from 10 years ago, crying alone in a fitting room.

With this in mind, every Nani Nalu customer is showered with a non-judgmental, open-hearted approach that seeks one thing above all else – to give you the confidence to enjoy yourself wherever and with whomever, secure in the knowledge you look fantastic.

Jennifer Cermak embraces the same lovely attitude in other aspects of her life. Two years ago, she and her daughter, then age 3, spent an entire day cleaning up a beach in Mexico after a storm. No campaign, no movement, no publicity; just mother and daughter and a whole lot of collected garbage.

In keeping with its marine theme (and Jennifer’s surfer chick credentials), Nali Nalu supports the ‘Rock the Boat’ turtle sanctuary foundation in New Zealand. Jennifer and her designers are also tied to the SurfRider foundation which battles a growing menace of ocean pollution.